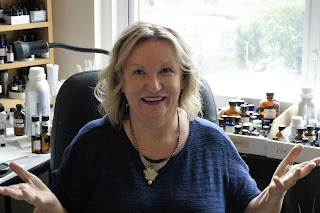 En Voyage Perfumes is an award winning artisanal perfumery founded by Shelley Waddington. All En Voyage perfumes are created, compounded, bottled and packaged at Shelley Waddington's West Coast studio. The fragrances are inspired by brilliant art, artists, literature, and indigenous raw fragrances from many countries. You can visit her website here.

"Every scent is a journey. Every journey has a scent"

BFL: What are your earliest scent memories?

Shelley: The bright, fruity smell of fresh strawberries growing in my Nana’s garden patch.  And the tomatoes!  I also remember the smell of my cat Cricket’s warm fur.
BFL: When did you realize you wanted to become a perfumer? Were you formally trained, or self taught?

Shelley: Carlos, I’ve wanted to be a perfumer ever since I was in the fifth grade!   Like many other little kids, I tried putting leaves and flowers into little bottles of water.  I was so disappointed when that didn’t work out.  As a young teen I went to the library to search for books that would tell me how to make "real" perfume.  Our village library had absolutely nothing like that.   I searched for many years before finally locating information about perfumemaking.   But in the meantime, I made soaps, liqueurs, and fragrant boxes.   And I wore perfumes!
My first learning experience with other perfumers was in the 1990’s with a couple of Yahoo groups of perfumers.  Aside from that, I’m largely self-taught, but a short class at Galimard in Grasse was when I realized that I wanted to incorporate synthetics into my perfumes.
BFL: Do you have a favorite note that you like to use in your compositions. Do you find any particular notes problematic to work with?

Shelley: I like this question!  A lot of perfumers avoid cedar wood atlas, but I love it and often use it.  It reminds me of my mother’s cedar chest, and of camping in the woods.  I find it to be a warm, embracing note.
There are several notes that are difficult to work with, either due to the fragrance profile or the solubility of the substance.  But I’d say that I struggled a lot with Iranian galbanum.  It’s a real bruiser of an odor that required a lot of reading and experimenting for me to master.  It was time well-spent, as I was finally able to use it as a distinct opening note in one of my best selling perfumes, Zelda.
BFL: The latest release from Zoologist Perfumes Civet is getting a lot of positive buzz, from myself included. Tell us about your journey creating this perfume with creative director Victor Wong.

Shelley: It’s a really fun process but it also requires a lot of time, respect, communication, mutual knowledge and mindfulness.
Victor is masterful at conceptualizing and communicating his vision and expectations.  Working with him is pleasurable.  That unleashes masses of creative energy on my part.  When I send the first round of several mods to him, he tells me which little bottle he likes best and why.  I focus my next round on the one he chooses, treating it in several different ways, and that’s how Civet was born. That’s the simplified version.
You could have knocked me over with a feather when Victor told me that Civet had become an A&O finalist!
BFL: Civet has amazing longevity, as do many of your creations. Can you give a hint on how you accomplish this?

Shelley: Thanks for not asking me to reveal all, Carlos!   Longevity is so important.   A quick rule of thumb is that longevity emerges from a few technicalities: knowing the size and strength characteristics of the molecules that I’m working with, and combining them with each other and with the other materials in optimum ratios.
BFL: I was honored to have worked on New York Man with you for The PLP Project. I was even more excited to learn that it became a staple in En Voyage Perfumes collection. Is it still selling well? What are some of your best sellers?

Shelley: The PLP Project was loads of fun and I too was very honored to work with you, Carlos.   I was especially pleased that New York Man emerged from our friendship in such a delightful way.  It remains a sought-after favorite in the En Voyage collection. I’m glad you ask about it, because I’ve had some new ideas for the second iteration of New York Man, and am hoping to release a flanker or even a reformulation in the near future.
BFL: Were you a perfume wearer growing up? What were some of your favorites?

Shelley: My great-aunt gave me a bottle of Schiaparelli’s Shocking when I was only six!  My mom was so annoyed with her for giving me such a civety,  grown-up perfume.  After that, I could only afford dimestore perfumes on my baby-sitting allowance.  But soon I could afford nicer perfumes and started wearing Coty, Estee Lauder, Dior, Guerlain, Chanel, Yves Saint Laurent, etc.

Later, when I started making my own perfumes,  I began as a natural perfumer.  But I think it was because I cut my nose so early on the fine fragrances that I soon felt the need to expand into a full palette.
BFL: How long does it take to create a new perfume? How are you typically inspired?

Shelley: From a view of 30 thousand feet, creating a new perfume is something of a two-step process.  There are many inspirations, but it takes a little time to select the one that is truly worthy.  Because my perfumes narrate fragrance  stories, a great deal of research goes into understanding the subject I’ve selected.  It can take up to several months. For example, I read many books about Zelda Fitzgerald and Frida Kahlo before ever sitting down to blend either of those fragrances. It was the same for several other of my fragrances such as Go Ask Alice, and Fiore di Bellagio. During the reading comes an understanding of the subject, and from that slowly emerges the fragrance ideas based on their lives. (Or upon the place, the myth, or the historical event that I’ve chosen.)
Once I’ve conceptualized the brief, it generally takes from 4-6 months to fully realize the final fragrance. Sometimes I'm lucky and it comes together more quickly.
BFL: When can we expect a new En Voyage Perfume?

Shelley: My newest release, Figa, will be featured at Tiger Lily Perfumery in San Francisco.  It was made in honor of the CaFleureBon anniversary, and is part of the Project Talisman, creative directed by Michelyn Camen.

A talisman is an item of protection from bullies and mean people.
The figa symbol is an ancient talisman represented by a closed fist.
I’ve translated it into a modern olfactive talisman made to protect the wearer from danger,  and from unpleasant energy of bad people.

I also like to think of it as my “F**k Trump” fragrance. 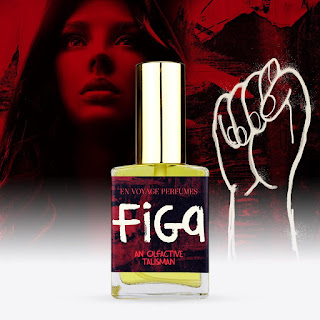 I hope you enjoyed my interview with Shelley. Thanks to her generosity, she is offering a travel size of Figa to one lucky BFL subscriber. This giveaway will be worldwide. To enter, please leave ONLY ONE comment on what you found most interesting about this interview, or what your favorite En Voyage Perfume Is. Good Luck.
Posted by Brooklyn Fragrance Lover at 12:58 AM