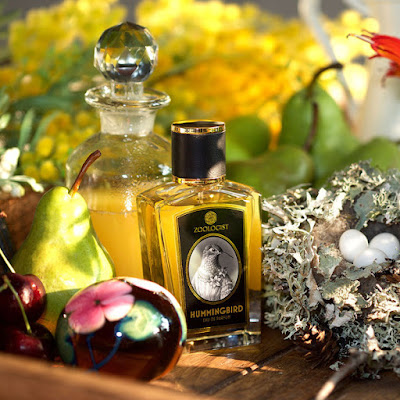 Zoologist Perfumes is a Canadian niche perfume brand launched in 2014, founded by Victor Wong who also serves as creative director. The line was very well received in the fragrance community, of which Mr Wong is very much active in.

The first three fragrances released were Beaver composed by Chris Bartlett, Panda and Rhinoceros which were composed by Paul Kiler. I did a house spotlight video last year which you can view here.

Hummingbird is a delightful blend of fruity nectar and light floral notes. It is airy and innocent, and for lack of a better word, pretty. Shelley Waddington has created a delicately balanced composition of notes. Having worked with Shelley on New York Man for The PLP Project, where in my opinion she demonstrates her flair to compose a *manly man* fragrance, here she pulls it back 2 notches and gives us a completely wearable *girly girl* fragrance. Well done!

Thanks to the generosity of Victor, we are offering one lucky reader a chance to win a sample of Hummingbird. To be entered, all you have to do is leave one comment with your favorite Zoologist Perfumes, OR your favorite creation by Shelley Waddington. One winner will be chosen by random.org in about a week. Good Luck, and thanks for reading.

DISCLAIMER: This review was based on a sample sent by the company. All opinions are my own.